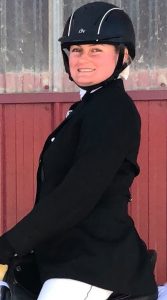 Jillian’s love for horses started in 1984, when she rode her first horse, an American Saddlebred, owned by her family.  She soaked up as much as information as she could from the horse savvy adults in her life and quickly became a solid horse person proficient enough to offer both vaulting lessons and trail rides in her community.

Several years later, as a young adult Jillian made a life changing decision to move to Ontario and pursue her passion of riding and horse training as a working student for Ulrich Frei, owner of the famous European Stallion Zentrum. Ulrich mentored her on everything from backing green horses to riding and schooling Prix St. George stallions.  It is here where Jillian’s passion for riding and dressage in particular became firmly anchored in her heart and soul.

Later, in 2004,  Jillian further augmented her equine knowledge and skills by mentoring with Terry Scott, where, after being a working student for Terry full time for a year, she achieved her teaching certification with Equine Canada.  Since then Jillian has enjoyed teaching many students the basics all the way up to Intermediare movements.  She has also trained countless green horses to competition ready for their owners.

Sharing her knowledge and watching her students – both the two and four legged ones – evolve and develop is what makes Jillian smile and continue to love her chosen career in the wonderful world of horses. 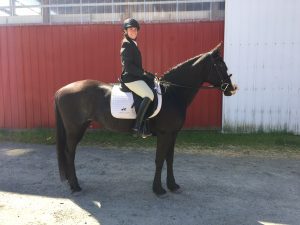 Tegan started riding at the age of 7. Funds for lessons were limited, but her passion for horses was strong, and Tegan would find creative ways to ride. For several years this meant doing barn chores for each ride. When Tegan was 15 she started began lessons with Jessica Vanderhoef.

Although she was trained for two years in jumpers, she realized her true passion was dressage. She has since focused solely on dressage, currently schooling second level. In 2013 she became a working student for Jessica as well attending university full time. Her duties included the day to day care of nine horses, training several horses and competing in dressage at the local level on Vancouver Island, where she met great success always placing in the ribbons.

In 2016 Tegan moved to Chilliwack to finish her Bachelor of Science degree at UFV. At the same time she began riding with Jill Cross, continuing her dressage education.

In 2018 Tegan took on training of some of Hillside Equine’s sales horses with great success. She also has begun teaching beginner lessons and which she enjoys.

Tegan brings with her over 15 years of experience, a deep love and passion for horses, as well as a breadth of knowledge. She is energetic and patient, but also sets high standards.